Working from home – the generational divide

Over a third of those currently employed are now working from home, including half of those who normally worked in an office before lockdown. In a new survey by Ipsos MORI, 6 in 10 (59%) of those now working mainly from home say it is not a challenge, while 40% admit to experiencing at the very least, fairly challenging circumstances. 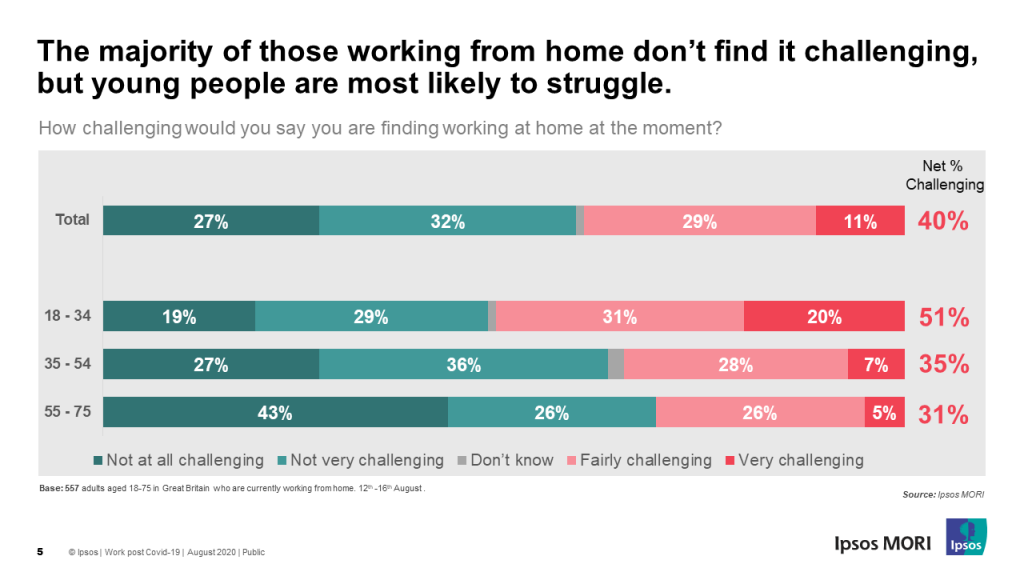 However, this varies according to age. Those aged between 18-34 are most likely to find working from home a challenge, just over half of this age group say they are finding their current working situation challenging (52%), while only around a third of other age groups say the same (35% of 35-54s and 31% of 55-75s).

The most common reason for those struggling to work from is the lack of suitable workspace available, 2 in 5 (38%) of those struggling cite this as a key cause of the challenge, while a further 36% say they miss meeting and working in person with their colleagues. Those aged 55-75 are significantly more likely to say they miss their colleagues; 55% say this is a reason they struggle with working from home, compared to a third of other age groups (33% of 18-34s and 34% of 35-54s). Over a quarter (27%) are finding it hard to collaborate with their co-workers while working from home. More than a third of those currently working from home say they are having difficulty maintaining a work-life balance (36%). 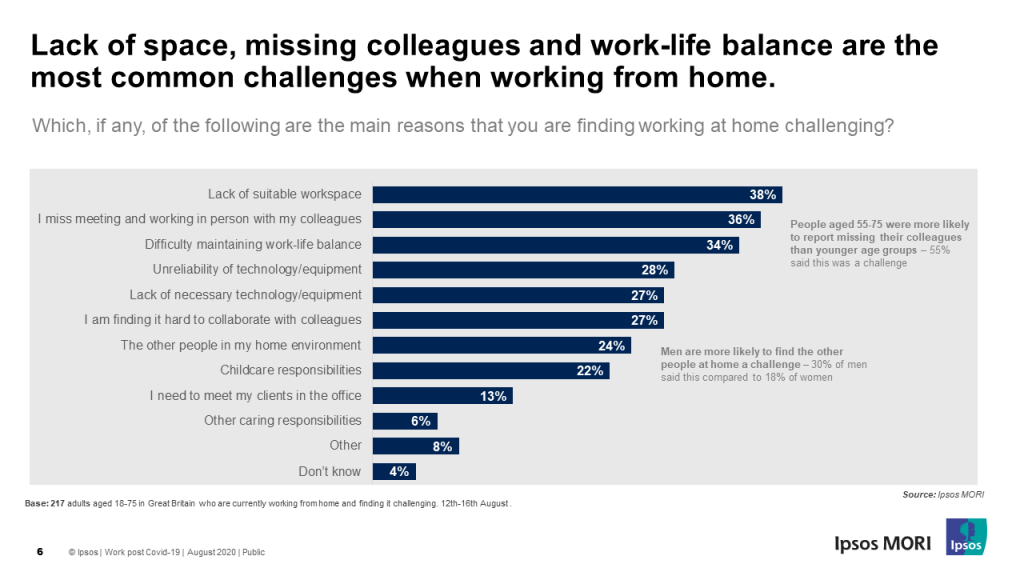 Other key reasons include unreliability and/ or lack of technology/ equipment (28% and 27% respectively), the other people in their home environment (24%) and childcare responsibilities (22%). Kelly Beaver, Managing Director of Ipsos MORI said:

As companies start looking to return to their offices to some degree our latest research shows that the best way to encourage people to return is emphasising the more collaborative atmosphere of working physically alongside colleagues as well as making it easier, particularly for younger workers, in having a properly set up space to work from.

Ipsos MORI interviewed a representative sample of 2104 adults in Great Britain aged 18+. Interviews were conducted online from 12th- 16th August 2020. Data are weighted to match the profile of the population. All polls are subject to a wide range of potential sources of error.

If you have any queries or concerns relating to any of the articles above or a general enquiry regarding employment law please contact Robert Gibson on 0191 2328451 or e-mail robertgibson@samuelphillips.co.uk